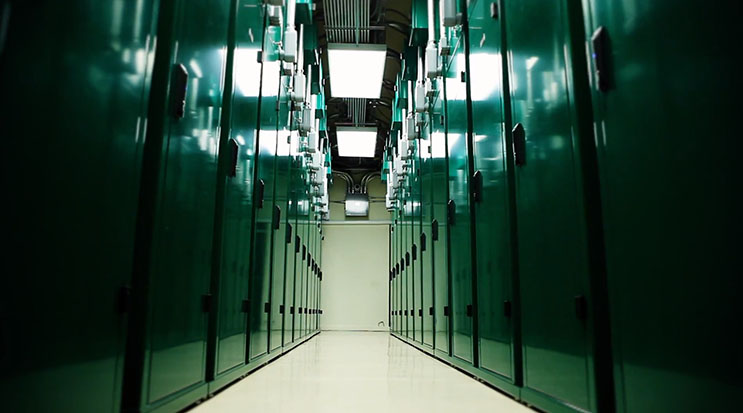 An aisle inside a ScaleMatric data center, with its custom

An aisle inside a ScaleMatric data center, with its custom containment colo cabinets. (Image: ScaleMatrix)

After years of building data centers, Chris Orlando and Mark Ortenzi paused in 2009 to go back to the drawing board. The industry veterans took three years to develop and test a new way to build and operate data centers.

The result is ScaleMatrix, a colocation and cloud company built atop a custom cabinet that supports loads of 52kW per rack and beyond. By containing and compartmentalizing workloads, ScaleMatrix effectively shrinks the data center into a single cabinet, which becomes the form factor for deploying customers.

“We knew that we wanted to do something that would support any hardware configuration from any vendor, and improve density, efficiency and security,” said Orlando, the Chief Sales and Marketing Officer for ScaleMatrix.

The cabinet design has helped ScaleMatrix build a following among high-density users in the genomics and energy industries, as well as an active cloud business. The San Diego-based company says the efficiency of its design provides operating economics that allow it to compete with traditional colocation providers.

The Cabinet as a Data Center

The key building block for ScaleMatrix is theDynamic Density Control cabinet, an extra-wide enclosure with two compartments: a bottom compartment housing a four-post rack (with extra depth to accommodate HPC servers), and a top compartment containing a heat exchanger.

The cabinet is sealed, with air filters, humidity control and fire suppression handled within the enclosure. Air is recirculated within the cabinet, with cool air delivered to server inlets via an 8-inch air plenum in the front of the rack. When exhaust heat exits the back of the equipment, it rises to the cooling compartment and is cooled and recirculated.

Cooling is provided by a fin-and-tube heat exchanger, which is fed by a cool water loop that runs overhead and attaches to the top of the cabinet. The use of containment allows ScaleMatrix to maintain temperatures within a 2 degree temperature range throughout the rack. The temperature within the rack is closely monitored and managed by an in-house DCIM (data center infrastructure management) system, which can regulate the temperature by adjusting a variable control valve on the cooling loop.

ScaleMatrix says it gains additional efficiency by running chilled water loops between 58 and 62 degrees, while many systems are set at 47 to 49 degrees. Using a higher water temperature in a cooling system allows you to use your chiller less, or not at all. 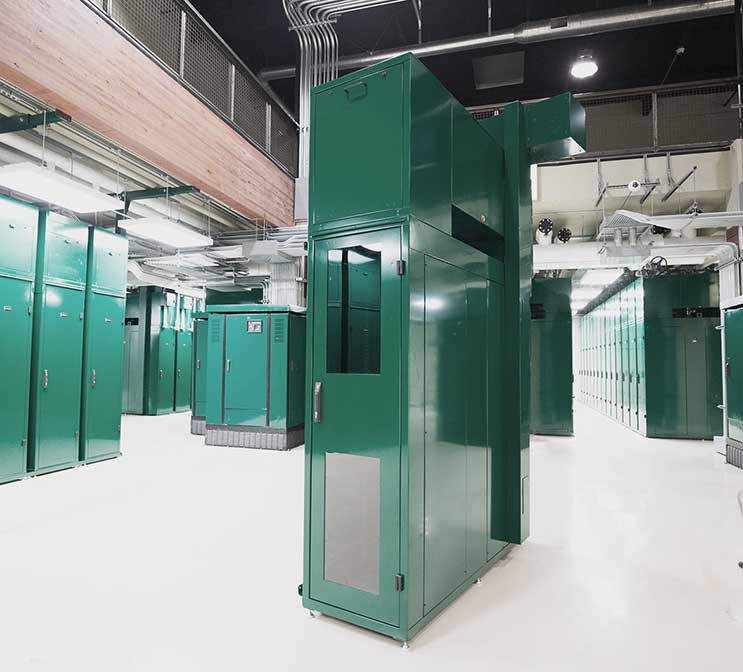 The Dynamic Density Control S1000 rack is the centerpiece of the ScaleMatrix hosting platform. (Photo: ScaleMatrix)

A typical cabinet in a hot aisle/cold aisle configuration can support between 5kW and 15kW of IT capacity in a rack. ScaleMatrix sells its S1000 cabinets in three configurations, supporting densities of 20kW a rack, 34 kW and 52kW.Custom configurations can support IT loads as high as 78kW per racks, Orlando said.

“That type of density is difficult to do in a traditional data center without water to the chip,” said Orlando. “We wanted to get away from the customization, expense and time needed to create those systems. All the cooling goes on between the equipment face and the closed door.”

This type of compartmentalized “micro data center” design is getting fresh attention with the growth of edge computing, with content being pushed to the edge of the network. Companies in this space include Elliptical Mobile Solutions and Schneider Electric, which have developed hardened racks for custom scenarios (like AOL’s outdoor micro modules) or for use in branch offices or remote locations.

ScaleMatrix has taken a different approach, developing the Dynamic Density Control cabinet as the building block for its colocation operation. Its model has been most appealling to users seeking serious density, but the company is confident in its ability to compete against traditional colo providers with a hot aisle/cold aise facilities.

“Because of our efficiency, there are very few instances in which we can’t provide a compelling value proposition,” said Orlando. “We’re able to sell our service at a rate that’s competitive with a traditional colo provider. That enables us to target the traditional colo model. It doesn’t cost any more than traditional colo, but offers better efficiency and energy costs, plus future proofing and risk mitigation. But the folks that get the most of of this design are the power users.”

What if you don’t need crazy density? ScaleMatrix says its design offers other selling points:

The Path to ScaleMatrix

Ortenzi and Orlando have worked together for 18 years, including stints at Cari.net and other tech companies in the San Diego area. “We built about six different facilities, and learned a lot about building data centers,” said Orlando. “We learned that the more efficient we are in the data center, the better our margins will be. We knew that if we could be more efficient, we would get better returns.”

They spend three years engineering, modeling and testing the ScaleMatrix design. In addition to the custom cabinets, the company uses an “Open Air NOC” that places its support team in the center of the data hall – which is made easier by the fact that the data hall is far quieter than most facilities, as fan noise is contained inside sealed racks. 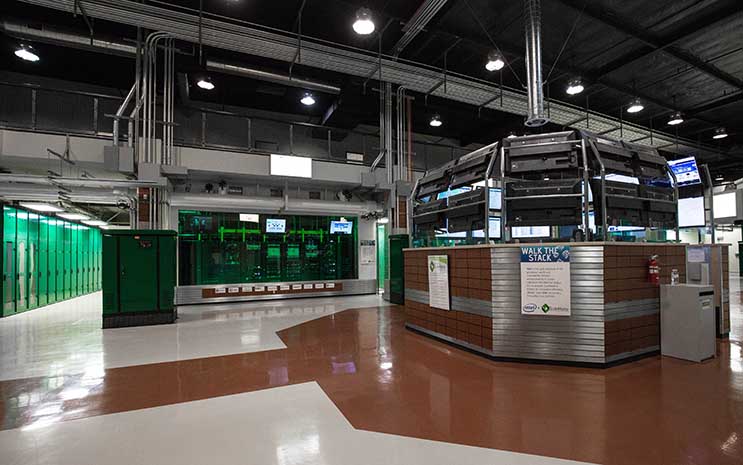 The Open Air NOC (at right) within the ScaleMatrix data center in San Diego. (Photo: ScaleMatrix)

The company opened its first data center in 2012 in a 50,000 square foot data hall in San Diego. After a slow start, ScaleMatrix has connected with the region’s cluster of companies and researchers focused on genomics. The company has also opened an 18,000 square foot data center in Katy, Texas, which has allowed ScaleMatrix to build business with energy firms in the Houston market, who require high-density workloads to do seismic modeling for their exploration efforts.

ScaleMatrix had 2014 revenue of $11.7 million, achieving growth of 1,400 percent in its first three years. That places the company in the 334th position in the Inc 500 list, which tracks the fastest-growing businesses in the country.

Orlando and Ortenzi launched ScaleMatrix with $25 million in seed capital from a private investor. “We had a long history in the market, and a lot of people knew us,” said Orlando, who added that “”$25 million is a lot for a seed round, but not a lot to build data centers.”

Orlando said ScaleMatrix will be cautious in its growth, but said the company sees an opportunity in the Chicago market. The longer roadmap includes plans for an East Coast facility

ScaleMatrix has seen growth in its cloud hosting business, which provides more than 50 percent of its revenue. A particular strength has been the company’s partnership with Dell. ScaleMatrix was Dell’s 2014 Cloud Partner of the year, and gained several hundred customers when Dell shifted its cloud model away from direct hosting to a partner focus.

Another area of potential growth is licensing the company’s cabinet technology to enterprises and rack manufacturers.

Data Center Sustainability (It's Not Just Our Cabinets That Are Green)

Data Center Sustainability (It's Not Just Our Cabinets That Are Green)

Select any filter and click on Apply to see results